A grief-stricken Sheikh Tariq na Hassir, the formidable ruler of the Kingdom of Avana, arrives in Paris to claim his brother’s child after a car crash killed his parents–only to find out from the hospital that the child isn’t their biological son. Salim is Tariq’s son, with his former lover, a renowned architect.

Three years ago, after being banished by Tariq from his desert kingdom, Melanie Jones secretly gave her baby to Tariq’s childless brother and his wife, in a swap the world was never supposed to discover.

The tragedy pulls her back to the world that rejected her and the man who abandoned her—the only man capable of turning her carefully controlled world upside down.

Tariq will do whatever it takes to protect his legacy, including claiming Melanie as his bride and his son as heir before scandals ensue. But Melanie has other plans for her future—a westernized life where she’s free to operate her own business, control her life, and hold onto her wish that one day she’ll meet a man who loves her for who she truly is.

If you love beautiful stories, set against a sensuous backdrop of the sensuous desert, art and innovative architecture you’ll love Claimed by The Sheikh.

PRAISE FOR CLAIMED BY THE SHEIKH

“Wow, just wow, I can’t articulate enough how compellingly page-turning this remarkable story was. If I could give it more than 5 stars this would be it! This author has the gift & the power to make you experience her remarkable craft on a whole other level. I’m not one to tell the story, the blurb & other reviewers will cover that but I will concede that this magical, mystical, hauntingly beautiful story will stay with me for the longest time. Highly recommended.”

grabbed me from the first page

“This book grabbed me from the first page. Both lead characters were portrayed fully as real people not just by how they looked as in many books. There being a child involved added to my enjoyment!”

determined to carve a career for herself

“The tone for this book is set in the opening chapters as the young Sheikh is faced with ongoing difficulties in the kingdom created by his atrocious father. He is fighting an ongoing battle to prevent himself from being sucked into the past and to rather create a new and prosperous future for his people. Tariq’s previous rejection of Melanie and the results have soured her against romantic love and made her determined to carve a career for herself.”

“I really like the premise of the book, I always like the royal romance with impediments to happiness and this book has it in spades. I like the strong figure of the Sheikh and the strong heroine who has built a professional career. Immediately I can see lots of problems that seem insurmountable at first: their past stormy relationship, the baby secret, her desire to have her own career, his desire for an heir, his demand to raise the child, his vow to swear off women. I also like that, right off the bat, we learn about his plan to build a reserve for animals and to right the many wrongs from his father’s legacy. These are all good foundations for a fiery, passionate and conflicting relationship.”

fantastic premise that has a substantial conflict

“Fantastic premise that has a substantial conflict behind it. I like Melanie a lot. A strong female heroine is what I want to read. I think that is particularly important with such a powerful man, and here in this instance, someone who can wield such power. I love love love the beginning. This is one tough guy but the book opens with him protecting a baby giraffe. Fantastic opening.”

Buy this book through the links below…

To enjoy your copy from Apple, Nook, and other great bookstores, click here>>https://books2read.com/u/brVjdZ

To enjoy your copy from Kobo: https://www.kobo.com/ebook/claimed-by-the-sheikh-8

Bride of Gold; Married by Christmas; Flight of Passion; Love All of Me; Sex With Strangers

Fall in love with these contemporary heroes and heroines trying to mend their hearts, overcome their fears and find true love—read the other standalone books my Mollie to discover the friends and family who tumble into a once-in-a-lifetime-happily-ever-after affair of the heart themselves. 5-star reviews

Posted in: All Books, Fiction Books 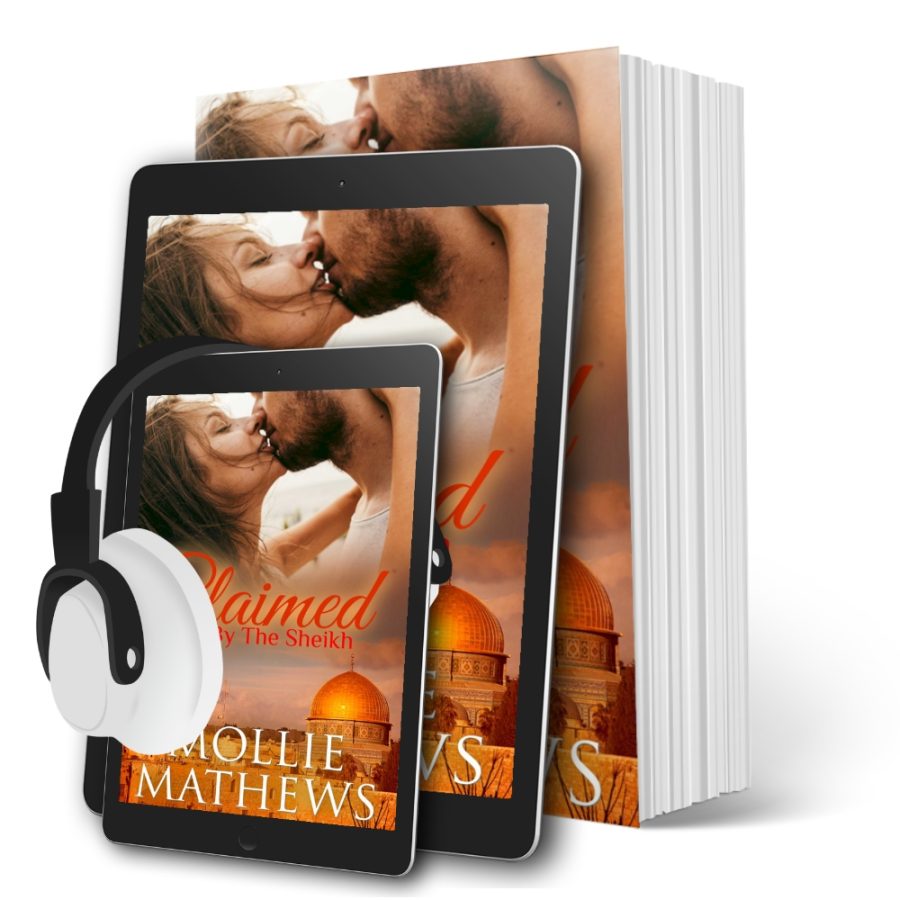